Well not a huge turn out, reports of colds and other commitments kept some away. Still not a problem as those who did turn out were rewarded with a fun and quick shoot with everyone getting a prize at the end – what could be better?

Once we got going it went smoothly and everyone enjoyed themselves. In the spirit of Christmas there was shared riles and a selection of Mince Pies. There was plenty to do and no hanging around.

There was something for everyone and we will definitely be doing a McSanta (McQueen) pairs again as that was excellent fun. In general shooting in pairs worked well so expect to see it again at some point in the future (Team Service Rifle Anyone)??

The results are in the results page and as the photos show there were plenty of cheerful faces.

Our president Ted Molyneux gave out the prizes and wished us all the seasons greetings and good luck for 2014. Ted is stepping down as President at the AGM as he is reducing his commitments. He has been on the committee since 1943 so we have to thank him for his commitment to the club over the years. He is irreplaceable.

So Happy Christmas and see you at the Hero Shoot. 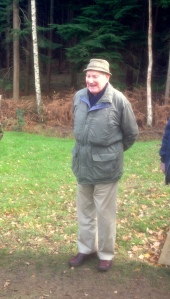